Confessions of a Screenwriter and Filmmaker: Charudutt Acharya

April 03, 2017
Charudutt Acharya is a film and TV writer who has written two dozen television shows, four films and a web series in a writing career that has spanned 18 years. He has donned the director's hat for his debut film Sonali Cable (which was produced by Rohan Sippy) In this interview, Charudutt shares his journey as a writer for the film and television medium... which has been "full of drama",  just like his writing!


Hi Charu. Tell us a bit about your journey as a screenwriter. How and when did you start off? And what were the initial years like.

After my BA from Mumbai University, I did a few odd jobs and got into a film unit as a trainee in the directing department. There some of the technicians were from the FTII and encouraged me to apply. I got in and trained to be a director.

During my time at the FTII (1993-95) there was no separate screenwriting program, but we were taught screenwriting as part of the directing program. I loved screenwriting as a subject and often collaborated on scripts of fellow students besides my own. Within a year and half of graduating, while I was assisting in direction, I met with a very nasty accident which confined me to bed for a long period of time.

To pay my bills and kill time, I started writing for a TV drama show. And have been writing since then. So I can say I became a professional writer ‘by accident’.

When did you get your first breakthrough in the screenwriting world? And how did it happen?

As mentioned, I had this accident. One of the persons who came to see me in the hospital was a TV channel executive for whom I had written a few in house promos and was supposed to direct them in that week. Since I would not be able to direct them, he had hired somebody else for that job and offered me a writing gig for a mini –series on his channel.

I actually wrote the first episode from the hospital. Full drama!

I went on to write several episodes of that series called D –LINE on Sahara TV.  Since then I have written for around two dozen shows and four films over 18 years.

You have been writing for one of the most popular shows on TV for more than 10 years. How has that experience been? Do you get bored sometimes keeping at it? And how do you find the inspiration to carry on?

For the last seven years, I have been co-writing CRIME PATROL SATARK. I took a break for a year in 2013 when I was making my feature SONALI CABLE.  I mainly write dialogue for the show and occasionally I write the screenplays as well. All our cases are real life cases which our fantastic research team puts together. The series writer and director of the show then expertly crafts out a screenplay (step-outline as the West calls it) and then I dialogue the scenes.

At times I outline the case too, based on the format set by the series writer. The experience has been fantastic because each case is different and we have explored various cinematic devices, thematic approaches, structural experiments with the show and touch wood, most of it has worked well. Also, the actors and the team out there is one of the most talented and hardworking one. So what one writes, gets translated rather well, making it all come together at the end.

Boredom I have never felt because I constantly feel privileged that I have work to do and work that in its genre and market, is considered good critically and commercially. But yes, it is exhausting work and takes long hours.

I watch movies, spend time with the family and cook something in the kitchen daily as a hobby and de-stressor.

You have written screenplays for Dum Maro Dum, Nautanki Saala! Among others. What would you say is the basic difference between writing for movies and TV serials and which is more challenging? Why?

I have NOT written the screenplay of Dum Maro Dum. I only wrote the dialogue for that movie. I have written screenplay and dialogue for the horror movie VAASTU SHASTRA and co-wrote both for NAUTANKI SAALA! And wrote my own movie SONALI CABLE.

The basic difference between the two, I would say is selection of the subject. Some stories lend themselves better to serialized story telling where as some stories are best told as stand-alone big screen experiences. Feature film structure and TV drama structure differ. Also cinema generally tends to have lot more cinematic non- verbal storytelling and TV is heavily dependent on dialogue.

Personally I find writing film more challenging because I have written more TV and don’t get very anxious with it. Film also needs far more economy of writing and expansion of imagination.

You recently wrote a web series on extra marital affairs. Do you think that people are tired of watching TV soaps and are looking at new kinds of content?

I wrote IT’S NOT THAT SIMPLE which plays on VOOT. It’s been well received. I am not sure about people getting tired of watching TV soaps. Mainstream ‘saans bahu’ soaps are primarily watched by women and families in single TV homes. That core audience is YET not watching streaming shows to in LARGE numbers. But of course we are in a state of flux and sub-sets of content and audiences are being constantly formed.  I think there is space for all kinds of content across all kinds of platforms. Well-made stuff that connects with the core target audience and marketed well, with a dash of good luck, will mostly do well. 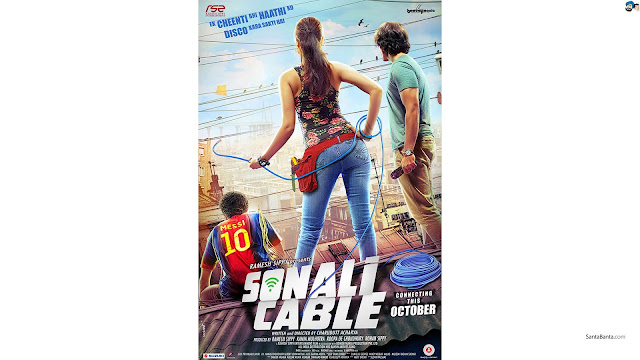 A lot of filmmakers write their own scripts. But you moved from screenwriting to direction. Did your experience as a screenwriter help you when it came to direction? Why/why not?

Writing and directing are very different skills. It’s a no brainer that you need a good script to make a good movie. But conversely a good script HAS to have a good director to become a good movie.
Having said that, what the inexperienced director in me brought to the table on the project was the script I wrote. So I was able to communicate my ideas and vision to the team better and they helped me bring it to life. Also, being a screenwriter, re-writing, improvisation and such is easier. But yes, I feel, a screenwriter transiting to directing must develop some directing muscles before going on floor. Working with actors is prime among them. Followed by shooting for the edit.

The pitfall of writer-directors in my opinion is, at times, you can fall in love with the material and lose that ruthless objectivity that is required to serve the story.

What's next on the cards?
Besides my regular Crime Patrol work, I have started work on a new feature film script that I hope to direct in 2018.

What's your top three pieces of advice to writers who want to make it in Bollywood as screenwriters?


1.     Learn the craft well. You don’t have to go to formal film school, but there are plenty of books and online resources to learn the craft of screenwriting and film making both. DO NOT ignore learning the basics and more of film making. That is hugely going to help the writing process. Never think, ”Oh I am a writer! I don’t need to know the technical stuff.” You need to know all that makes your writing better. Editing and sound are KEY.

2.     Get a foot into the door in the industry in any capacity. You need to be among people who generate work. You need to know the pulse of these folks. Keep abreast of the broad genres, budgets and kinds of scripts that are getting made. Be ín the moment’ and ín step’.

3.     Live well. Good life experience and a sound understanding of a cultural milieu,   is both the sponge and the icing on the script cake.

Thanks so much Charu for your insights into screenwriting. And good luck to you in all your future endeavours.