August 25, 2018
As an author you create characters and give them unique traits -- both good and bad -- and then throw them into all kinds of situations -- including some really tough ones. Yeah, basically you're playing God! I asked my author friend Reet Singh, if she ever wondered what her characters thought about her and ummm... shall we say, her 'meddlesome ways'?

Reet chose to answer my question in a very unique way. She decided that the next time the lead characters from her new upcoming book -- Take One Fake Fiance -- met she would spy on them! But before we get into what emerged from her 'spying' activities, here's a little info about TOFF...along with the first look at the cover! 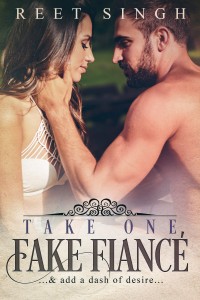 Mita Ramphul is single and fancy-free – and she wants to stay that way for the foreseeable future. Living and working on the idyllic island of Mauritius is the stuff dreams are made of – until she bumps into a man who threatens to destroy it all.

Tanay Devkumar is cynical and shuttered – events in his past have cast a long and deep shadow. Convinced that Mita Ramphul represents a threat to his sister’s happiness, he seeks her out, determined to block her nefarious plans.

They meet in circumstances that can only be described as hostile – suspicions abound and resentments flare on both sides, even as attraction simmers beneath the surface. A series of disastrous events follow and they are compelled to pretend that they are in love and wish to marry.

It is meant to be a temporary engagement – but will Mita be able to resist her fake fiancé or will his scorching kisses make her yearn for something more permanent?

Originally published as “Scorched by His Fire” by Harlequin India, 2014


Take One Fake Fiancé is a refurbished, revamped, remodelled, updated version of Scorched and is NOW AVAILABLE on Kindle.

Setting: A suite in a posh hotel in Delhi, India.


Tanay has just finished pouring out the drinks and is now frowning at Mita who stands nearby chewing her lip in a distracted way.


Tanay: Mita, you’re acting a bit aloof of late. You’re not still blaming me for my idiotic behavior of last week, are you?

Tanay: What is that supposed to mean? How can you not know? You’ve been avoiding me and you can’t tell me why you’re doing it?

Tanay: Reet? Who the hell is Reet?

Tanay: You’ve sold our story to some author?

Mita: No, Tanay, I wouldn’t do that. You do know that we are a figment of Reet’s imagination?

Tanay: What? That’s not true, Mita. We’re real. When I touch you, what I feel is real. This is real…

Mita (breathless): I know. She’s good. She’s got you fooled, for one.

Mita: Tell me, Tanay, if we are real and Reet Singh isn’t, then every time we’re in an amorous situation, why does some crazy scene shift happen, or a crisis suddenly looms and we’re torn apart? How do you explain that?

Mita (sighs): I don’t. Okay, explain Dubai. We were in bed, halfway to heaven and...

Tanay (groans): Don’t remind me – unless you want to make up for that lost opportunity now? That couch looks like just the thing…

(He reaches for the buttons on Mita’s blouse)

Mita: Tanay, look around you.

Tanay (impatiently turns his head to where Mita is pointing): Bloody hell! Bangla graffiti? Are we in a Kolkata subway?

Mita: I rest my case.

Tanay (moves away and scratches his beard in shocked wonder): Bloody hell!

Tanay: Does that mean we can’t ever make love unless the high and mighty Reet Singh decides we may?

Mita: Well, she's not always watching - she sleeps sometimes. And she has to go brew her own coffee every few hours - because her husband is away these days – that takes her a while. The best is when she runs out of wine and chocolates, because then she procrastinates for hours...

Tanay: That’s music to my ears.

Mita: That’s not music – that’s Reet snoring in her own inimitable style.

Reet wakens a good six hours later and gropes for her coffee, her reading glasses and her spycam footage -- in that order. As she examines the footage, a sly smile creases her face.

Reet Singh: And this, ladies and gentlemen, is how you let your characters take over and practically write your scenes for you!

For more fun snippets from Reet's book check out these blogposts:

Head over to Devika's blog where you will get to meet Mita -- she is really mad about something...so, be warned!

Visit Paromita's blog where Tanay is at his sexy best!


If you're curious about Tanay and Mita's first meeting, you gotta go to Ruchi's blog.

For a sneak peek at Tanay and Mita's first kiss, check out Preethi's post.

At Sue's blog, Reet talks about character development - and the man under discussion is -- who else but -- Tanay Devkumar of TOFF