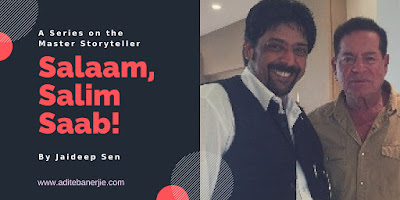 November was a month of celebrations. Salim Saab’s birthday fell on the 24th
It’s only in the fitness of things that such a wonderful human being should also be acknowledged for his contributions to the world of scriptwriting by the International Film Festival of India (IFFI) 2018 with a Lifetime Achievement Award for his outstanding contribution to Indian cinema in the same month.

Salim Saab’s innate humanity was evident through his acceptance speech which was read out by his son who received the award in Goa on his behalf. Salim Saab, also later tweeted about it, and dedicated the award to his janmabhoomi, Indore, his karmabhoomi Mumbai and the film industry and his erstwhile writing partner Mr. Javed Akhtar. He mentioned that without Javed Saab’s contribution in his career, this achievement would not have been possible. 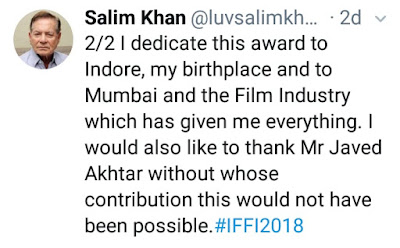 On hearing these words at the event, a lot of present dignitaries were completely overwhelmed with Salim Saab’s gracious gesture, as were countless people in Indore who were touched that he had chosen to credit the city for his success. Indeed, this gesture is special because most do not even feel the need to share their moment in the spotlight with another human, never mind their birthplace. And that’s exactly what makes Salim Saab so special.

While there is no denying that Javed Saab’s participation has been crucial not just in the making of team Salim-Javed but also in the historic chapter of contemporary Indian cinema, only a person as magnanimous as Salim Saab would include another individual in his moment of glory.

Uncannily, Javed Saab used the same adjective -- “magnanimous” – to describe Salim Saab in their first joint interview after their unfortunate parting which in my unflinching opinion is the biggest blow and loss to the Indian film fraternity. Marvels such as Sholay and Deewar have transcended the boundaries of states and languages to represent Indian cinema and after the Salim-Javed era, only a handful of powerful scripts have been able to achieve similar status.

When the duo was asked about their split Salim Saab very graciously took the complete blame for it, which left Javed Saab embarrassed and he said that only a very magnanimous man like Salim Saab could speak and conduct himself in such a graceful manner.

This is the essence of the persona and commitment of the legend called Salim Khan Saab. Talking about his commitment reminds me of an anecdote where on receiving the bound script of Dostana with “The End” written on its last page, the film’s renowned director, late Mr. Raj Khosla had remarked that he’d been directing films for the last 25 years and this was the first time he was seeing a script with “The End” written on it before commencement of filming.

There is no doubt in my mind that Indian cinema has been blessed with a personality of Salim Saab’s stature. So, let’s celebrate Salim Khan!

Previous Episodes in the Series…
#1 Salaam, Salim Saab
#2 Silence that Speaks
#3 The Invaluable Value of the Pen
#4 The Guru of Screenwriting
#5 The Forever Burning Flame of Sholay
#6 The Strength of Characterisation
#7 Bond of Brotherhood
#8 The Sangam of a Genius and his Admirer
#9 First Link in the Zanjeer
#10 Vijay – The Eternal Winner

March 18, 2019
Welcome to Week N of Authors' Tips: A to Z of Writing. If this is the first time you are visiting this series, here's a quick recap. Authors share their tips on writing fiction - and each week we talk about various aspects of writing. This week it's time to take a closer look at Niche Markets  A few weeks ago I'd posted about the importance of knowing your Genre as it helps readers to discover your books. A genre like Romance -- which incidentally is the top selling category -- has more than 100-plus sub-categories. These are often called 'niches', a marketing jargon for specialist sub-categories. While some of the more popular ones like romantic suspense, chicklit, paranormal romance, historical romance, etc. are evergreen favourites, as reading preferences evolve, new niches emerge from time to time. For instance, a few years back the super-duper success of E.L. James' Fifty Shades of Grey sparked off a new niche of BDSM within the sub-genre
8 comments
Read more