Devika Fernando on Why She Loves Writing 'Scandalous' Women

April 08, 2019
There is a new book on the indie publishing block and it's called The Indian Prince's Scandalous Bride. Better still, it's been written by the fabulous DEVIKA FERNANDO.  I simply love the title and all that it promises on its pages (ahem!). When I asked the author why she likes writing about 'scandalous' women, here's what she had to say. She has very helpfully added an excerpt from the book, which simply wants me to pick up the book right away! Over to Devika!

'Thanks a lot for having me over, Adite. Ashley sends chocolate, and Vivaan sends flowers,' - Devika. 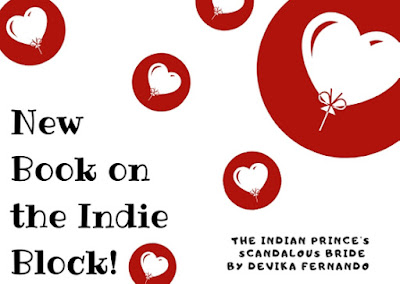 THE INDIAN PRINCE’S SCANDALOUS BRIDE – that’s a title that captures attention. At least I
hope so. ;) I chose it for two reasons: Firstly, all of my royal romances have a word beginning with S in the title (Special | Stubborn | Surprise | for Book 5 Secret).

Secondly, I wanted to highlight how unlikely it seems that these two protagonists find their happily-ever-after. They’re polar opposites: a fiery redhead from England who works as a wedding planner and has had very bad luck with men so far; a prince from India who isn’t supposed to marry for love and should never indulge in holiday flings either. But as happens in real life too, love cares little for logic. I can’t tell you why Ashley, the heroine, is scandalous because that would be a spoiler. But I can tell you one thing: she’s a modern woman, someone flawed and relatable. And in a way, that means that all of my brides in the royal romance series are “scandalous”.

I don’t write classical heroines who are rather meek, swoon and moon over the hero, are flawless angels and would know the answer to everything. I write women who feel authentic, who could be one of your friends or someone you wrote about on the news. And yes, such ‘normal’ women DO enter the world of the royals, as many real-life weddings prove. My heroines can be single mothers, divorced, introverted, mixed-race, orphans, abuse victims… They can be sassy, mule-headed, volatile, have trust issues or love their independence… Because that’s alright and that’s also how many women are in reality. And it’s all the more fun to write such characters and pair them with royalty. They deserve that bit of magic, that better life, that chance at loving men who are far from ordinary but also far from perfect themselves. 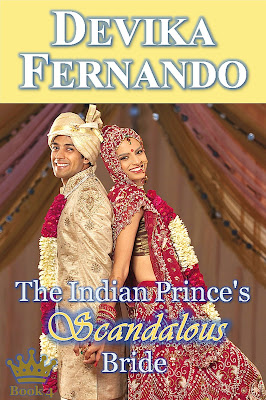 The first thing he saw after an incredulous slow blink was a pair of long, slender, and disturbingly naked, legs. The pale kind you rarely found anywhere out of Europe. He blinked some more, registering that there was most certainly no nude foreign woman in the garden—but that made the sight only more enticing. The shapely legs with feet in strappy leather sandals belonged to a woman in a summer dress of emerald green that didn’t fit into this place. Sure, due to their global business dealings they had vetted visitors on the premises occasionally, but mostly men; if there were women, they were dressed in snazzy business suits or sophisticated costumes, sometimes even in traditional Indian garb. This dress was
different. Modest by international standards, with elbow-length sleeves and a neither too loose nor too tight cut, it was currently hugging the woman’s every curve and exposing a tantalizing sliver of even paler thigh as its wearer was kneeling on the stones and leaning towards the water of the pond.

Swallowing around a dry throat, Vivaan scolded himself for ogling the stranger like this. He’d been treated to his own share of being ogled ever since childhood, and he detested it. But he couldn’t help himself. Who was this woman more likely to be encountered on a piazza in Italy or in a river-side park in Paris? And what was she doing here, all alone and unaware?

Wait, was she alone? Belatedly, it occurred to him to scan their surroundings, half-expecting a bespectacled diplomat accompanying his secretary or a potbellied European aristocrat who’d swoop in to claim his trophy wife. But there was nobody to be seen. It was only him and the water nymph, who chose this very moment to lean forward even more, with a soft grunt and then an unladylike squeal.

Vivaan had barely torn his eyes away from another inch of bared thigh when the figure righted itself with a splash of water and a twirl of fabric. His breath catching in his throat, he studied the rest of this mysterious visitor that was now revealed. The woman was sitting on the stones, completely oblivious of him standing several feet away as she stared enraptured at something in her right hand, dripping water. She had a mane of reddish brown hair, catching the sunlight to gleam in tawny and amber shades and giving her even more of an ethereal, magical feel. Her profile revealed a strong chin and a full mouth. She moved her hand, and what she was so reverently holding in her palm glittered a startling blue.

Vivaan sucked in a much-needed breath as realization dawned. His feet carried him closer and he blurted something out in English before he could think twice of it. “Stealing the royal family’s jewels will not remain unpunished, you know.”

For more info about Devika's book, check out this link.