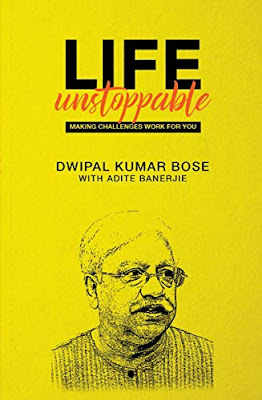 In what seems like another life I used to be a journalist. The 1990s were the heydays of economic journalism in India. New broadsheets were being launched and niche publications were coming up at a frenetic pace. The first among the "A&M" (advertising and marketing) supplements - Brand Equity -  was brought out by The Economic Times. I had recently transitioned from a general magazine to this new niche publication and was learning the ropes of the sector as I became part of a small team of writers/reporters/editors that was tasked with bringing out the weekly supplement.

One of the many people I interacted with from the A&M world was Mr. D.K. Bose. He was heading Thompson Social, a division of the top ad agency in the country, HTA. Mr. Bose's insights helped me learn more about the ins and outs of the industry. Sometimes during our conversations he would talk about his boyhood years and his early career. When he told me that during his stint at the Met Dept (before he went into advertising) he would commute by camel cart to work, I had reacted spontaneously: someday you must write about your experiences.

Fast forward - 30 years. I had moved away from journalism and into fiction writing. However, among the handful of people I had continued to stay in touch with from my journalism days, thanks to social media, was Mr. Bose. One day he happened to mention that he had plans to write his biography. I was happy to hear that and told him so. A couple of years passed by and I casually inquired how his biography was coming along. He informed me, a bit dejectedly that it had come to a standstill. He asked if I would be interested in looking at it and giving him my feedback. I agreed and after reading it gave him my honest feedback.

His next question was: would I be interested in helping him out with it. And so, began a new writing experience for me as collaborator and co-author of a memoir. Over the last 8 months as I worked with him on the manuscript, I had the privilege of gaining a peek into Mr Bose's life that has been peppered with many challenges and successes and ups and downs. It's a true story of grit and determination, professional highs and personal lows and inspiring at many levels.

It was also a learning experience for me -- writing a profile of a person as a journalist is different from co-authoring a memoir and putting yourself in the shoes of the narrator. Mr. Bose who taught me a few things about the A&M world many years ago, once again turned out to be a mentor, this time in helping me figure out how to collaborate on a memoir writing project. So, thank you, Mr. Bose for the honour and the privilege.

Titled Life Unstoppable: Making Challenges Work for You the book is now available across all Amazon platforms.

Blurb:  Nothing in life is risk-free. For every risk that you take, you acquire knowledge that can be shaped and applied to any challenging situation. This is one of the most significant lessons that Dwipal Kumar Bose has learnt from an eventful life spanning 75 years.

Growing up in a middle class Bengali family, comprising twelve siblings, Bose has seen adversity at close quarters. Joining the advertising industry as a Voucher Clerk in the then SH Benson and rising to the position of President Ogilvy Outreach; switching lanes from advertising to social communication as the head of the first Indian social communications agency Thompson Social, Bose has been there, done it.

Bose’s story is an inspiring tale of grit and determination, rejection and success. In narrating his life’s journey, the social communication strategist and behaviour change mentor goes beyond the tried and tested route of offering ‘success strategies’ but shares his own learnings and reveals how challenges can be made to work for you.