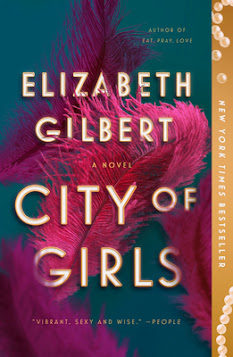 Elizabeth Gilbert is famously known for Eat, Pray, Love, a book that I frankly did not enjoy and couldn't bring myself to finish. When I picked up City of Girls, I was intrigued more by the fact that it was set in New York, a city that I had visited a couple of years ago. Watching a Broadway show was the major highlight of my trip. Given that City of Girls is also set in the world of 'showgirls', I was hooked.

New York of the 1940s comes alive on the pages as we meet the rich and entitled Vivian Morris who arrives in the City to live with her slightly wild and eccentric aunt Peg. Peg runs a theatre where Vivian befriends an interesting cast of characters including a sexy showgirl, Peg's female secretary and lover and their actress friend. Vivian teams up with her showgirl friend and finds ample ways to exercise her two skills -- "sewing and sex" -- until the inevitable happens.

Scandal ensues and upends Vivian's life. Vivian returns to her hometown -- repentant and shamed. After the rollicking midpoint, this segment matches the beat of Vivian's life which has virtually come to a standstill. This perhaps is the slowest part of the book. Thankfully, the narrative gathers pace and Vivian returns to New York. How she rebuilds her life with some help from Peg and a new set of friends is what the second half of the book is about. Vivian evolves from being a wild child who is out for a good time to a more grounded person who has no illusions about her promiscuous ways.

The last segment of the book deals with Vivian finding her true love. It's poignant but it does feel a bit out of place in the book. It's almost as if  the author feels that Vivian needs to be "rescued" from herself. So, the story of Vivian and Frank unfolds - a love story that is poignant and uplifting and bestows on the unapologetically carnal Vivian a relationship that is sex-less.

The evocative writing and Vivian's unique voice saves City of Girls from becoming a 1940's version of Sex in the City. Though overall, the book keeps you engaged, the singular focus on Vivian's point of view takes away from the narrative. My favourite character of the book? New York, of course.

Would love to hear your thoughts, if you have read the book.