#JustTheWayYouAre has a brand new cover 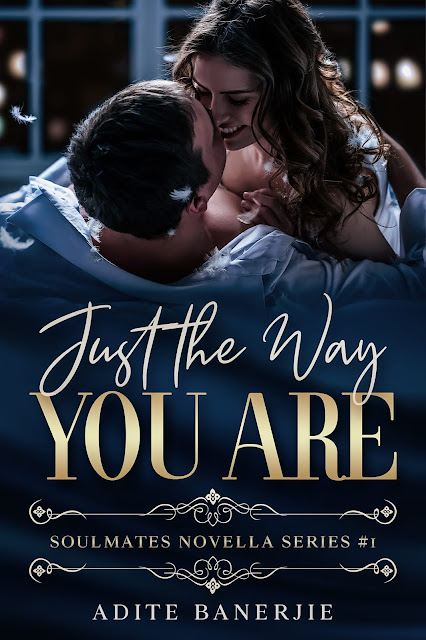 My feel good, emotional romance novella Just The Way You Are has got a fantastic new cover.

Here's a little excerpt from the novella and let me know if you agree that the cover perfectly captures the Yash-Shikha vibe.

Shikha and Yash had ended up in his room long after the party broke up. Seduction by music - was that even possible? And then, one thing had led to another and they had ended up in bed with their bodies making music of a different kind. Truth be told, it had been pretty sensational.

After a shower she felt ready to face the world. She had no clue how she would do it but she had to give the annoying hunk, who also happened to be a good eight years younger than her, the brush off. She had no wish to be branded a 'cougar' or 'bitch', or worse still, 'slut' as she definitely was not into younger men.

She finger-combed her hair, took a deep breath and opened the door. She was ready to face the music.

As soon as she stepped out, she heard the strains of the guitar. He had pulled on a white shirt and jeans; his hair was tousled and his eyes closed as he sang about the hopelessness of unrequited love. She didn't have the heart to stop him but knew the longer she stayed the more difficult it would be to draw herself out of this strange push-pull attraction she felt for this stranger.

His gaze shifted to her. The mischievous glint was back in his eyes. He switched songs and mood mid-way and teased her with a line from a popular Bollywood number, "Kehdo na, kehdo na, you're my Sonia."

She glared at him and said sternly, "Your voice is suited more for those soulful numbers."

She gave him a half smile and turned to leave, only to find her wrist being grabbed. "Uh-huh. Not so fast. You haven't given me your phone number yet."

"Didn't you say you don't believe in one-night stands?"

"That means you have to go out on a date with me. Otherwise what happened between us will forever be etched in stone as a one-night stand."

She wanted to slap his smug handsome face. "Will you stop being so juvenile!"

"Oh, just because you're a couple of years older to me?"

"Ah! That must be why we were so hot together. Older women are way too sexy."

"Shut up!" There was a wobble in her voice and he instantly caught it.

"Am I embarrassing you?"

"No. You're just being a massive pain in the butt. Now, get out of my way."

"Think about it though...what's the big deal about age in man-woman relationships?"

Suddenly there was a knock at the door. "Yash...are you in there? We need to talk, please."

He rolled his eyes dramatically and mouthed silently. "Please tell her to go away."

So the dice had finally rolled in her favour.

Another knock, this time more urgent than the last. "Yash, please open the door. I really, really need to talk to you."

She cocked her eyebrow at him and he folded his hands pleadingly.

She gave him a wicked smile and called out, "I think you have the wrong room."

For a moment there was silence as if the woman was thinking what she should say next. As the moments ticked by Yash kept waving his hands as if that would make her leave.

After what seemed like an interminable delay, the woman responded, "Oh ok. Sorry to have bothered you."

Yash blew a relieved breath out.

As the click-clack of high heels receded down the corridor, Shikha smartly sidestepped him, twiddled her fingers at him and set off. "Cheerio."

"Hey....I object to being objectified," he called behind her.

She was already on her way out of the room but couldn't stop grinning at his remark.

Want to read more? Find it here at  Amazon.com & Amazon.IN