How writing a screenplay is different from penning a novel

Sometime back I had done a post for Storizen magazine on how screenplay writing differs from novel writing. A script or screenplay is essentially a roadmap that guides a filmmaker towards his/her destination of putting together a film. And for that reason, there are a few rules that the writer needs to follow:

1. Descriptions need to be minimal and offer the filmmaking team with just the precise details about location, ambience, mood and action.

2. Emotions need to be actionable. Or, something that an actor can act out.

3. Scripts change with inputs from other members of the crew. And a writer has to be willing to make changes to her original ideas. You can read the full post here. 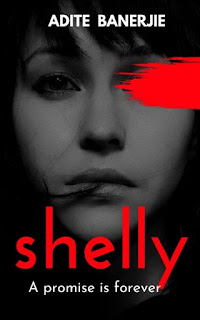 In that article I had not talked about screenplay formatting - which is a very important aspect of writing screenplays. The screenplay format - which demands that action lines or descriptions be written from one end of the page to another and the dialogues are centered in the middle - has been determined to enable the filmmaking team to precisely calculate screen time of the scenes. Typically one page of a script equals one minute of screen time and hence for a 100 minute movie, the screenplay should be anything between 90-100 pages. Again, the rule to go by is less is more.

This post is aimed at giving the aspiring screenplay writer a look at what a film script should be like. To illustrate the differences, I have chosen one of my own stories - Shelly: A Promise is Forever. I had initially written this as a screenplay and then turned it into a short story.

The logline of Shelly is:  A woman keeps her promise to her lover years after she dies.

Here is the first page of the Short Story:

The silver-haired man stood in front of the life-size portrait of a young woman dressed in sailing attire. The luscious red lips beckoned to him with a hint of a smile. Dark tresses tumbled all around her pretty face. Her eyes were just as he remembered them - dark, sparkling with humour and holding a promise. A promise that had remained unfulfilled. It had been fifty long years since he had held her hand, gazed into those lovely eyes and bid her goodbye. But it seemed like yesterday. All he had to do was reach out and pull her into his arms. Instinctively, Anand Khalap held his hand out.

"She does look like she will spring out of the picture any moment, doesn't she?"

That voice grated on his ears like a nail scraping a wall. He had hoped never to hear his brother Raj ever again or set eyes on him, but here he was, visiting the Royal Yacht Club at the invitation of his estranged sibling.

He turned around slowly to face Raj and got a jolt. Age had not been kind to Raj. The brother who could have rivaled any Bollywood film star in the looks department, now looked decrepit. Despite the wrinkles, dark shadows under his eyes and brittle skin, his arrogant smirk was still the same. Could it be true that Raj was dying, just as he had written in his letter?

"What's wrong with you, Raj? You look like death warmed up."

Raj grimaced. "You always did believe in calling a spade a spade. But I'm not ready to kick to the bucket, yet."

Before Anand could stop himself he said, "You do have a knack of cheating death."

"Whoa! That was below the belt, bro." Taking a deep breath he continued, "Never mind. The reason I asked you to come over was not to discuss my medical reports with you. Rather, I have something to show you. Come with me, please."

Anand couldn't bring himself to commiserate with his brother. There was too much bad blood between them. When he had received Raj's letter, he had a good mind to trash it and forget about his invitation to attend the fiftieth anniversary celebrations of the Yacht Club. If anything, he did not want to be reminded that on this very day half a century ago he had lost the love of his life.

Yet, he had not been able to ignore Raj's invitation--his words had an edge of desperation that didn't quite go with his brother's brash and arrogant demeanour. "Just give this dying old man one chance to make amends," he had written.

The salt-tinged breeze touched Anand gently, evoking memories of happier times. As they walked out of the hall and towards the bay where the yachts were docked, he was inexorably being drawn into the past. Wave after wave of memories crashed within his mind like a high speed film, drenching his heart with a myriad emotions.

"There she is," Raj said as they approached the waterfront. "Isn't she a beauty?"

It took Anand a couple of minutes to pull himself out of his reverie and focus on the present. Right in front of him a 32-foot yacht bobbed gently on the waters. The name 'Shelly' was painted in gold across its pristine white body. The mist hanging around the yacht and the full moon beaming down silver light created a surreal effect. He stood before it, transfixed, as his mind travelled back in a tumultuous rush to this day in 1971.

Also note the differences in the short story version vis-a-vis the script version. The latter gives only enough information that is needed to follow the story. Whereas in the short story, the descriptions find fuller play and there is scope to play with words.

I hope this post gives you a better insight into how scripts differ from novels. If you have any other questions, feel free to ask.

PS: If the story has intrigued you, do grab the ebook from Amazon. It is available for free on Kindle Unlimited.