Author Nandini Sen Gupta: "I was obsessed with a man who lived 1500 years ago!"

Why do writers spend weeks, months and years toiling over a story that will simply not let them go until they have got it out of their system? Historical fiction writer Nandini Sen Gupta tells us what compelled her to write The Ocean's Own, the third in her Gupta Empire trilogy.... 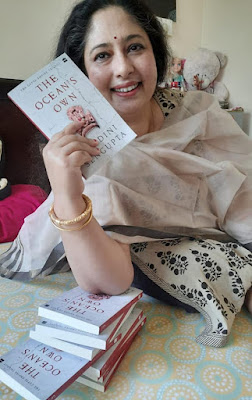 Crushing on a Coin
Do you believe in love at first sight? I do. It happened to me. And this is the story of how that crush turned out. Both for me and for him. I am Nandini Sengupta, the author of the The Ocean's Own, the last and final book in the Gupta Empire Trilogy (publisher: HarperCollins India). And this is the story of how a face I came across imprinted on a gold coin turned into my muse. A muse who called out to me through the mists of time. You see, the object of my obsession was a man who lived many years ago. Correction, he lived 1500 years ago. And yet so strong was his pull that he made me embark on a topsy-turvy travel back to his time. His name: Maharaja Adhiraja Samrat Shri Samudragupta. And he is the reason I wrote The Ocean's Own.

I first came across Samudragupta while researching classical India. I had already written who books about his son and great grandson -- Devaraja Chandragupta Vikramaditya was the hero of The King Within and Skandagupta was the protagonist of The Poisoned Heart. I was half convinced that the third and final book should be about Kumaragupta, Chandragupta's son. It made sense in terms of continuity and would allow me to use the plot threads I had spun out already.

And yet, in the end I chose Samudragupta. The reason for that were his coins and an odd pillar that carried his story. I was intrigued that he left his imprint on the Allahabad Pillar, that wonderful time capsule that also wears the marks of two other monarchs from two other millennia -- Ashoka and Jahangir.

Samudragupta's Prayag Prasasthi told me a lot about his achievements -- that he was a warrior par excellence, that he conquered almost the entire sub continent and then some, that he remained unvanquished till the end. I realised how unfairly our history books treated him, calling him the Indian Napoleon when in fact he was a far better strategist and mightier conqueror than the French emperor. 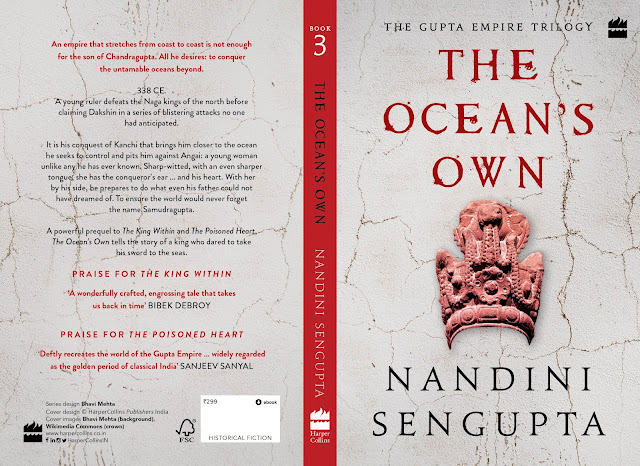 But that's not the part of the Prasasthi, written by his prime minister Harisena, that intrigued me. What did were personal details -- the fact that his body bore the marks of his military campaigns, so numerous were the battle scars he carried. The fact that he was adept at playing the veena and indeed even minted coins which show him enjoying his music. That he appreciated art and literature and indeed beauty -- his gold coins show him staring intently at a flower, in what can only be described as Wordsworthian wonder. That beyond military might, his diplomacy and administrative abilities created a strong and stable empire that remained intact for the next century and a half.

The more I researched him, the more I realised how modern a man he was. Here's an ancient Indian king who had no problems referring to himself by his mother's lineage -- he proudly called himself Licchavi-dauhitra or grandson of the Licchavis. Here's an emperor who had no problems minting coins with his queen Dattadevi's likeness on them.  And yet he respected and stuck to the traditions of his time conducting the horse sacrifice or Ashwamedha Yagna and leaving the imprint of his Garuda Dhwaja imperial scepter all over the land.

I was intrigued too by his looks – a face was more arresting than beautiful, his body bearing the marks of his ambition with pride, shoulder length curly locks and an athletic frame that belied his fearsome reputation in the battlefield. The coins told me all this but I still didn’t KNOW the man. I needed to get into his head. I needed to find out the chinks in his armour. Did this paragon of power ever feel vulnerable? Did his unshakeable faith in destiny and drive ever falter?

The Ocean’s Own is my attempt to answer these questions. My humble effort to bring alive this utterly modern ancient monarch to a post-modern generation of readers. I hope he will captivate you, as much as he mesmerized me.

Nandini Sen Gupta is a Pondicherry based journalist and writer of historical fiction and narrative history. After a chance visit to Ajanta Ellora caves, she became fascinated with India's past in general and ancient India in particular. For the next ten years, she read history for fun. Her book credits include the bestselling The Blue Horse And Other Amazing Animals from Indian History (publisher Hachette) -- which debuted in November 2020 and was shortlisted for Auther Awards 2021 in children's fiction category -- The King Within & The Poisoned Heart, Book I & II of the Gupta Empire Trilogy by HarperCollins India and The Story of Kalidas: The Gem Among Poets by Eicher Goodearth Publications. Her latest book, The Ocean's Own, is the third and final book in the Gupta Empire Trilogy. Nandini is currently writing her first narrative non-fiction biography to be published in 2022