Are Screenwriters Under Appreciated in Bollywood? 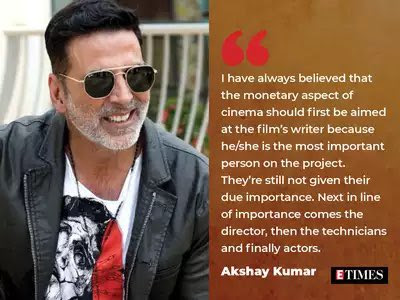 The Hindi movie industry is one of the most prolific film industries in the world. According to available figures on the Internet, revenue collections in 2019 stood at Rs 19000 crore. This includes revenues earned from films, television, OTT, etc. Over the last couple of years, thanks to the pandemic, movie viewing in theatres has seen a significant decline. People are preferring to watch streaming channels where there are scores of movies and web series to choose from at the press of a remote button.

2022 has seen more movies releasing in theatres but it seems like audiences are not returning as fast as the filmmakers would like them to. So much so that a string of big budget films including the much awaited Aamir Khan starrer Lal Singh Chadha has had a shockingly disastrous opening at the box office. Something that would be unthinkable for a mega star of his stature. Akshay Kumar, another mega star has had an equally tepid release in Raksha Bandhan.

It's not as if all film releases are faring badly at the box office though. A clutch of movies made by the South Indian film industry (including RRR and KGF) have had massive collections at the box office. So what gives? According to most industry pundits, the major factor for the great run that South Indian films are experiencing is their emphasis on a strong storyline rather than star power. The Hindi movie makers in contrast are relying on the heft of their mega stars to pull audiences into the theatres and it's not working any more. The pay package of the big-league Bollywood stars is anything between Rs 120 - Rs 135 crore.

Recently, even Akshay Kumar  admitted that writers are the most important professionals for film projects and they are not adequately compensated (source: Economic Times). While it is one thing to pay lip service to the role of the screenwriter, will this realization change anything on the ground in Bollywood? To do that, movie makers will have to rejig the entire system. Which would mean that actors like Akshay Kumar would have to take a massive pay cut. It remains to be seen if the star-centric system can actually be rejigged and made into an ecosystem that focuses on great storytelling rather than star power.