The Different Stages of Writing - and an Appeal 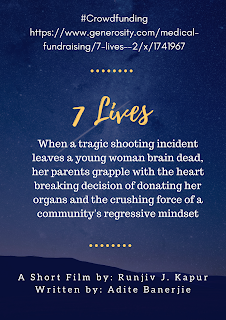 Every story idea has its own distinct journey. Each is unique and can never be identical to the path that any of your previous ideas has travelled. Perhaps, that's the most exciting thing about writing.

A few months ago a filmmaker friend asked me if I would be interested in writing a short film. He had come across a true incident which he wanted to make a film about. That was the beginning of the journey for "Seven Lives", a short film that I scripted for filmmaker Runjiv J. Kapur.

When Runjiv discussed the idea with me, I knew it had the potential to be made into a thought-provoking, dramatic film. The subject was about society's role and how it can impact individual lives. As a writer I was excited about it and I began writing a draft. The first stage of the story's journey had kicked in.

The story development process is the second stage of the writing process. The stage when the writer distills the idea and plays with it, trying to give it  shape, substance, style.

After several brainstorming sessions and tweaking of the various elements of the script, it acquired its final shape.

And now begins the story's third and final phase of the journey. When the story travels beyond the computer and the printed page into a live action film. Excitement mounts, as you can't wait to see how your story plays out on the screen.

Seven Lives has entered its third phase. And yet there is a way to go before it hits the screen: the funding and filmmaking process.

As a writer, my role is limited in this phase but yes, as a team member I can pitch in a bit. And I hope you will also participate in this exciting journey with me.

While a chunk of the film's funding is in place, we are hoping to crowdfund the project. Details of the project are attached in the link.

It would be wonderful if you could contribute in any small way towards this short film which discusses a very important subject: Organ Donation. Even sharing it among your friends and family would be of enormous help. Please click this link to find out more about Seven Lives.

Thank you! I look forward to your participation. :)