#Review of an Evergreen Bestseller - A Stone for Danny Fisher 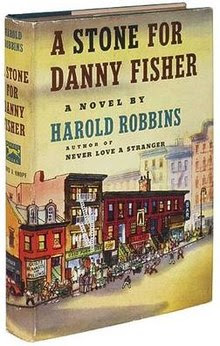 A Stone for Danny Fisher is one of those evergreen bestsellers that has wowed readers across several generations.

Why did I pick this book? For one, I remembered reading it way back when I was in college and being consumed by it! It had made a huge impact on me and I particularly recalled one scene that has remained with me all through the years -- an emotional, gut-wrenching scene involving Danny and his beloved dog, Rexie.

Second, it was one of the first books that introduced me to the genre of "pulp fiction". Harold Robbins was notorious for writing 'trashy books with a lot of sex' but this is not one of them! This is one of his early books -- the depth of emotion and the motivations of Danny Fisher who lived in the times of the Great Depression could rival those of any literary fiction novel.

Third, A Stone... has tremendous nostalgic value for me. I remember discussing this book with my Dad. Somehow, reading it again was like reconnecting with him and reliving those moments.

Forty-plus years after I'd first read A Stone..., I found it as compelling a story as I had when I first read it. I could not put the book down until I finished the last page. I was tearing up once more when Danny loses his beloved dog Rexie. I found myself experiencing anguish all over again at the blows that life deals this talented boxer. Danny could have gone on to become a celebrated boxer but instead has to constantly fight poverty. The angsty relationship between Danny and his father is one of the best fictional accounts of father-son relationships. Sarah/Ronnie the prostitute with a golden heart is probably a role model for all those yesteryear movies with similar characters that have graced the celluloid screens of Hollywood as well as Bollywood. The relationship between Danny and Nellie and the ups and down they face is sweet and emotional, heart-wrenching and realistic. And then there is Danny's brother-in-law, Sam - a character with shades of grey who plays a huge role in Danny's life. Set in the age of the Great Depression, the story delivers an emotional punch in the gut after all these years!

It would make a great movie and strangely enough there has been only one adaptation of the book -- the 1958 movie starring Elvis Presley, King Creole.

If you have read the book, do read it again and if you haven't, don't miss it!