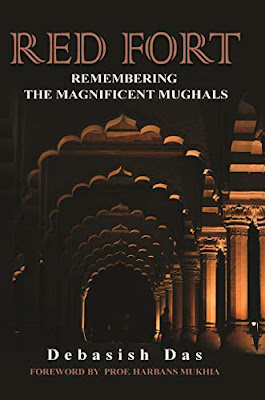 Indian history as taught to us in text books is often a dry account of names, incidents and dates. Information provided at historical sites or monuments rarely offer insights into the era when they were built and the people who left their legacy behind. Even the history buff would find it difficult to make the connections between the glorious past that the placards talk about and the stark, near ruinous conditions of the monuments. While Western museums often have well-researched audio visual presentations for the lay visitor to be able to make this connect, unfortunately this facility is not available at Indian monuments.

This gap in presenting history in an interesting and imaginative way is sought to be bridged by Debasish Das in his book Red Fort: Remembering the Magnificent Mughals.

The author takes you on a guided tour of the Red Fort and the era in which it was built. The book is extensively researched and the facts presented in a structured format. The little stories and vivid descriptions add colour and bring alive an era that has passed. The reader is virtually taken on a drive through the alleys and streets of Shahajahanabad, its bazaars and mandis, the ramparts of the fort, the magnificent hallways and the customs of Mughal noblemen. Take for example this description of the Chandni Chauk where the reader gets a glimpse of the pomp and splendour of the amirs: "In the evenings, it transformed into a place for splenderous, ostentatious displays by the amirs and their families. Ceremonial marriage processions were led through it and turned the streets into a glittering exhibition...Trains of camels and elephants were accompanied by mace bearers carrying gold or silver sticks and men waving huge fans of peacock feathers. Servants ran ahead of them, shouting and announcing their revered titles. It was a place of great show."

It also provides insights into the lives of ordinary people. "Only those artisans who were associated with the Palace or with wealthy amirs could flourish and prosper. Others -- however admirable their work -- were subjected to harsh treatment and were poorly paid...the artists had good reason to congratulate themselves if the amir's whip (korrah) was not employed on them as part payment for their superlative work."

Studded with little anecdotes and details, the book explores the various aspects of Mughal life, within and beyond the Red Fort, creating a complete picture of  life in Shahajanabad (which is now a part of modern Delhi). It also helps the reader understand what went into the making of the "magnificent Mughals" and also get insights into the reasons for their downfall.

For anyone who has visited the Red Fort and for every citizen of Delhi, this book is a must-read. It provides insightful glimpses into the past and the legacy that continues to echo in the present.

About the Book:RED FORT: REMEMBERING THE MAGNIFICENT MUGHALS seeks to present the lived culture of Mughals in all its multiple facets. The book is divided in four parts. In Part 1 the focus is on the Imperial court and the court etiquette, cultivation of Persian and its enrichment with translations from Sanskrit, patronage of Hindu and Jain scholars. Part 2 contains detailed accounts of the Red Fort and the symbolism of its architecture, the philosophy of jharokha darshan, ceremonies, games and pastimes, the material culture of costumes and jewellery, food, drink and perfumery. The remaining two parts deal with the decline and fall of the Mughal rule and the British Colonial Durbars at the Red Fort. The broadly historical narrative is enlivened by various anecdotes.

About the Author:DEBASISH DAS is a telecom professional; he is a history aficionado and loves to photograph and document ancient ruins. He lives in Gurgaon and spends his weekends in exploring little known monuments in Delhi and its neighbourhood. Since the last few years, he has been writing heritage blogs (www.lighteddream.wordpress.com) on Delhi’s monuments; encouraged by their reception, he has now ventured into a full-length book about the most magnificent of all the Delhi monuments, the Red Fort.

Available on Amazon in Paperback and Kindle Editions