The wise screen writer is he who wears his second-best suit, artistically speaking, and doesn’t take things too much to heart. He should have a touch of cynicism, but only a touch. The complete cynic is as useless to Hollywood as he is to himself. He should do the best he can without straining at it. He should be scrupulously honest about his work, but he should not expect scrupulous honesty in return. He won’t get it. And when he has had enough, he should say goodbye with a smile, because for all he knows he may want to go back.

– Raymond ChandlerScreenwriting is a hard taskmaster. And a screenwriter is also a very patient person, one who slaves away at honing his craft, filling his drawers with many many works-in-progress until one of those hit the jackpot.

Today, I'm very excited to interview my Twitter friend Gabriel Constans, who has been writing scripts for the last 12 years. His first produced script, a LGBT romantic comedy -- The Last Conception -- releases on multiple streaming channels this week. It's the perfect occasion to find out more about Gabriel's journey as a novelist and screenwriter... 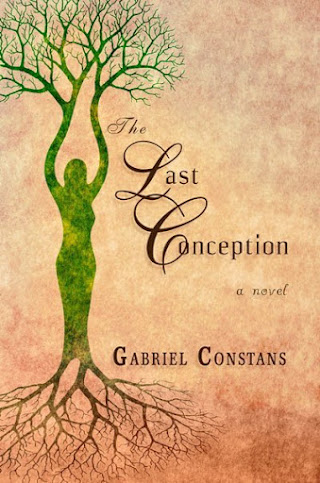 Congratulations, Gabriel, on the release of your film. Could you tell us a bit about yourself and your journey as a writer.

Thank you. My journey as a writer started in high school, took a hiatus during my late twenties and started again in my thirties. It began as a journalist writing nonfiction stories for newspapers, journals, magazines and web sites. Luckily, every article I wrote (mostly profiles of people doing good things in the world), was published in some outlet in the world.
Then I began to write short stories and discovered how difficult that was to do - at least to write a good one. After a few years I was able to get a number of them accepted in various magazines and journals and eventually put together a collection for two books (one for children and the other for adults). The first is called “Solar Girl and Lunar Boy” and the one for adults is titled “Saint Catherine’s Baby”. That was followed with my foray into writing novels. These include “Loving Annalise”, “Buddha’s Wife” and “The Last Conception”.
While writing fiction I also put together a number of nonfiction books that are primarily about grief, loss, health, sexuality and autobiography. These include “Good Grief: Love, Loss & Healing”, “Don’t Just Sit There, Do Something! Grief’s Wake Up Call”, “The Penis Dialogues: Handle With Care”, and two books with smoothie recipes.
About twelve years ago, I began writing screenplays, which as expected was much more difficult than I’d imagined. Since then I’ve had two of them produced (one based on my book The Last Conception), another in development with Kiss the Limit Productions (Buddha’s Wife), and five other scripts I’m trying to get optioned and/or produced.
How did the idea of The Last Conception come to you and what was it about this story that fascinated you?

The idea for the book, which the screenplay is adapted from, is in some ways a continuation of my novel Buddha’s Wife, which explored what life may have been like from Yasodhara’s perspective (Siddhartha’s wife before he became The Buddha). Historically, their son Rahula never married or had children and followed his father (and mother) by becoming a monk in their order. I wondered what would it be like if in fact he did have children and their lineage was kept secret to the present day. Traces of the story The DaVinci Code can be seen in this premise (without the violence). What if someone in today’s world was suddenly told that she was the last in line of The Buddha and had to have a baby to keep the bloodline alive? I included several other factors and twists in the story as well.

How did the book to screen adaptation happen? How easy/difficult was it to find the right producers for the project?

After The Last Conception was published as a book, by Melange Books (a great publisher and team), it took me several years to write the screenplay and then another two to find a producer willing to take it on. All together, about four years. As most writers know, especially screenwriters, getting a screenplay accepted, let alone seen or even looked at, is very difficult. It is similar to finding a traditional publisher or agent, in the amount of time and rejections involved. Once the script is optioned, it doesn’t mean it will get made and if it is produced there is no guarantee that it will be distributed and shown anywhere. The odds are “not” in your favor. One quality that has helped is that of persistence (in writing and querying).

What are you currently working on?

My current efforts are completely centered around finding producers/financing for the other scripts I’ve already written. Once one of them, a coming-of-age story about a girl growing up in the south in a small town and trying to protect some endangered sea turtles, gets accepted somewhere, I’ll began writing another script based on a kindred author at Melange Books.

Good luck with your writing and we hope to see many more books and films penned by you!

About The Last Conception and where you can watch...

THE LAST CONCEPTION (LGBT Romantic Comedy)
The Sikand family learns that their only hope of continuing their “ancient bloodline” is their skeptical gay daughter Savarna.
The film is available on the following channels:
Amazon Prime, Apple iTunes, Google Play, Fandango Now, Microsoft/Xbox, and Vudu, as well as cable and satellite dish networks InDemand, Rogers, Dish Network/Sling TV, DirectTV and Vubiquity.
To find out more about Gabriel Constans and his writing visit his website.