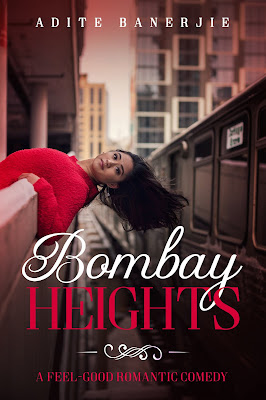 Reading romance during the festive season adds to the fun and sparkle, doesn't it? So, for Diwali 2021, I decided to bring out a Paperback edition of my rom-com Bombay Heights: Sleepless in the City of Dreams.

The best part is that the story takes place during the festive season. What's not to love! So, get ready to be immersed in the spirit of the festival of lights!

Blurb: Small town girl Sanjana Kale wants a fresh start in Mumbai. A challenging job and some much needed distance from her ludicrously over-protective family could get her life under control. Forced to team up with video game designer Ashwin Deo, who is too attractive for his own good, she finds life becoming a whole lot more complicated when he turns out to be her new neighbour. How can she maintain a professional distance with this charming troublemaker who believes in getting up close and personal? To make matters worse, her ex tries to manipulate her loved ones to work his way back into her life. Hysterical siblings, a cantankerous client, an ex who will not take no for an answer, and a blow hot blow cold neighbour... Sanjana is sleepless in the City of Dreams! Can she do what Ashwin dares her to--create a few ripples even if it upsets her family?

Check out this excerpt and if you like it, do pick up a copy for yourself or gift it to your friends and family.

The paperback is now available across multiple platforms - Amazon, Notionpress and Flipkart.

Have a great Diwali!

Sanjana was fuming by the time she had finished at the office. Ashwin Deo—aka Ash—was perhaps the most infuriating person she had ever come across. What was worse, everyone at work—including her normally reserved boss—seemed to think the sun shone out of his tight butt!  To give the Devil its due, he was particularly blessed by the Gods (or perhaps a great physical trainer) when it came to a superb anatomy.  His business-casual attire added substance to his style without turning him into some kind of filmstar eye-candy.

He had insisted on narrating the whole embarrassing incident about the confusion over his dog’s name in excruciating detail and had made it out as if she was responsible for the fact that the mutt was still alive and breathing. She had swung between wanting the earth to swallow her up and landing a mighty kick in a part of his gorgeous anatomy where it would hurt the most!

She heaved a sigh of relief when Sir was called away for another meeting and she could escape the spotlight that Ash had managed to keep focused on her all through. But the bad news was there would be no getting away from the wretched guy. Everyone seemed to think he was the one who could execute her idea to perfection.

The insistent ring tone of her mobile cut through her musings. Meghna was at the other end, sounding like an excited child who had been gifted a toy she had been yearning for.

“Get ready for your best Diwali ever,” announced Meghna.

“It’s all been finalized. We’re coming to Mumbai for Diwali. We’re gonna have a blast!”

This could not be for real! Even though she loved her family to bits, this was simply the wrong time for them to land up.

“Doesn’t that sound like fun? I have already started packing. So let me know what you want me to bring from Nagpur.”

“Meghna, could we postpone this to…uh…Christmas?”

“Sanjana, you don’t want to meet us?” Meghna’s voice was laced with horror and hurt and she instantly felt like a heel.

“No, of course not. I want you guys to come but now is not a good time. Frankly, it’s the worst time possible for me.”

“Everyone gets leave during Diwali.”

“I have this project coming up and Diwali is like ten days away. I will probably be working my butt off during the holidays.”

“That’s okay, then,” Meghna announced firmly. “You can finish as much of your work before we come to Mumbai. And then we are going to have fun.”

Before she could protest any more, her sister called off adding ominously that Gauri would call with more details later.

Paying off the cabbie, she walked towards the apartment lobby. Having her family over would have been awesome. But how would she explain away Chetan’s absence? He had been a permanent fixture during the last three Diwali’s and her sisters had treated him like a part of the family. Ever since she had moved to Mumbai, she’d evaded their questions about Chetan with vague replies. But once they arrived here, it would take them less than ten minutes to get to the bottom of the sorry mess of her broken relationship.

She had been so deep in thought, she didn’t notice the “out of service” board hanging on the lift door until the guard called out, “Madam, lift not working.”

As she trudged up seven floors to her apartment, the problem went round and round in her head like a top gone crazy.

She glanced at the pile of boxes stacked outside the neighbouring flat as she fished around in her bag for the keys.  The door flew open and there was Pinky looking fresh as strawberry ice-cream in yet another of her pink concoctions.

“Hey, you are back early? No classes today?” Sanjana asked her room-mate.

Pinky took her arm and pulled her inside the apartment. “I have some exciting news for you.”

Sanjana rolled her eyes and waited for the latest instalment of gossip.

“We have a new neighbour and he is the hunkiest dude evvvvver!”

Her “hmmm…” got a glare from Pinky and a terse, “What’s wrong with you?  Bad day at work?”

“Aww… wait, till I give you all the juicy details about the Dude Next Door. It’ll put you in the right mood. Now, sit down while I get you a nice cup of chai.”

She pushed her into the couch which was, like most furnishings in their flat, selected by the resident budding fashion designer—Pinky Mehra—who had a preference for all things pink!

“Do you mind if I catch up on the gossip later? I need a shower.”

“No problemo,” her friend yelled from the kitchen. “I got some cupcakes too from Cake Town.”

“Duh…We have a new neighbour! We should at least invite the guy over for coffee and cake.”

Sanjana rolled her eyes again.  “A little too neighbourly, if you ask me!”

Pinky shouted back. “Wait till you meet him. I think the “Love thy Neighbour” meme was written with this guy in mind.”

“That’s not a meme, silly; it’s an adage from the Bible.”

“Hmm… so Jesus must have been quite a hottie, no?”

“Pinky, you’re too much.” Sanjana howled with laughter as she stepped into the bathroom.

After a shower and a change into her most comfortable but faded T-shirt and pyjamas, she felt calmer and more centred than she had all day.

“So, what’s up?” Pinky sat cross-legged on the couch next to her with her palms locked around her mug.

“Well, I signed up for the most difficult assignment and I have to collaborate with a highly infuriating person.”

“No, some new guy Sir thinks the world of. And the funny thing is, it’s all happening because I had this brainwave of a new way of pitching the project.”

“You know what they say about tiding over tough situations, don’t you?”

“I’m waiting for you to shed the light!”

“Fake it till you make it.” Pinky gave her a cocky grin.

“I bow to you, O Great Queen of Corny Quotes!”

Pinky sniffed as if hurt by Sanjana’s sarcasm, though her eyes sparkled with mischief. “You will thank me for it, someday.”

“And to top it all… my family has threatened to come over for Diwali.”

“Yeah…but given my deadline…”

Just then the doorbell rang. Sanjana bounced off the couch to get it.

Sanjana’s words dried on her tongue and she heard herself gasp.  Leaning against the door frame was a six-foot apparition she thought she had seen the last of for the day!

Ash stood there, lopsided grin firmly in place and Dumbass in his arms.

Three times in a row in the same day. Life had just turned into a B-grade Bollywood film!