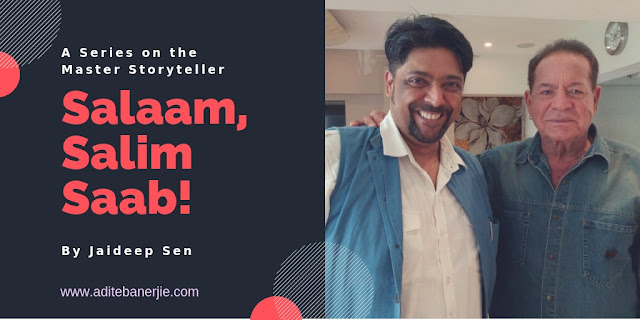 Mere Pass Baap Hain! ....Now that’s  something Salman Khan can say with pride in real life because of amongst multiple reasons the one great talent that he’s inherited from his father, Salim Khan Saab, is the Eye to spot special talent like father and son themselves are.

As I watched Gangubai Kathiwadi which personally I feel is Sanjay Leela Bhansali’s Best Film to date, and was swept by its brilliance I instinctively thought of doffing my hat to Salman Khan, through this piece, for giving us this gem of a filmmaker.

Having been around in the film Industry for three decades I know what a fight it is to convince an A Lister to do your first film and when unfortunately it fails commercially--as it happened with Khamoshi-The Musical-- it’s unheard of for the star to do the same filmmaker’s second film.

But in this case Salman did not flinch, stood by Sanjay Bhansali and how! Hum Dil De Chuke Sanam happened and the rest is history. This rock solid support has been acknowledged and thanked by Sanjay Bhansali himself in a latest on camera interview, a sign of a humble genius.

This eye for spotting special talent is a talent Salman Khan has inherited  from his father, an institution of writing, Salim Khan Saab.

Five decades back Salim Saab along with his erstwhile partner, Javed Akhtar Saab -- with their and Hindi cinema’s most game changing script ever,  Zanjeer -- backed an actor with a string of failed films behind him to play Vijay Khanna. The actor was Amitabh Bachchan and the rest is again history.

Can you imagine this industry without special talents like Amitabh Bachchan and Sanjay Leela Bhansali? It’s Unimaginable.

So for making it happen, I from the bottom of my heart thank this special father-son duo, Salim Saab and Salman Bhai who had volunteered to back unseen, unheard and unsuccessful names and turn them into the mammoth successes.

And just for this inheritance itself, Salman Khan can proudly say “Mere Pass Baap Hain!”

Read his earlier posts in the Salam Salim Saab series:

#8 The Sangam of a Genius and his Admirer

#9 First Link in the Zanjeer

#12 The Memorable Women Behind the Angry Young Man

#13 The Definition of a Love Story

#17 When Salman Khan Chose to Strip Off his Stardom

#18 The Most Memorable Line of Indian Cinema